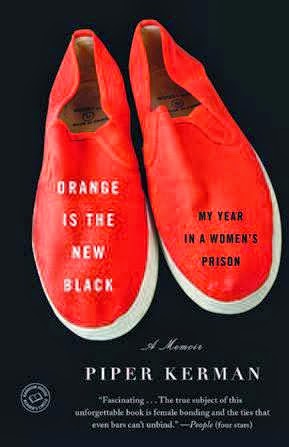 If you have a Netflix subscription, you’ve probably heard of Netflix’s Original Series Orange is the New Black. Although it only has only been out for one season, it already has quite a lot of fans and awards. Taylor Schilling, who plays the main character Piper Chapman, was nominated for a Golden Globe for Best Performance by an Actress in a Television Series.

Since I can’t highlight the Netflix series, I’ll be featuring the memoir we have here in our library with the same title. This newly added memoir can be found in our After Class Collection here. From what I have read about the memoir and the series, the series is more loosely based on the book.

Instead of having a video preview of the show, I’m providing a link to a short article Piper Kerman wrote in the New York Times entitled, “Prison, Day 1.” With such an uplifting title, how can you not want to read it? I’m also including a link to a NPR interview Kerman did last August on Fresh Air on the differences and similarities between her memoir and the series.

For all you OITNB fans out there, the whole second season (all 13 episodes) will be available on Netflix on June 6, 2014.