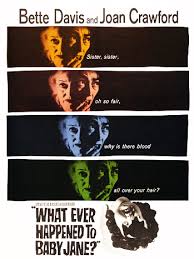 And now, for something a little less well-known… What Ever Happened to Baby Jane came out in 1962 and even if you may have not seen or heard of the movie, you will probably be familiar with these actresses. Bette Davis (as Baby Jane) and Joan Crawford (as her crippled sister Blanche) star in this dark film about jealously and sibling rivalry. Baby Jane was a child star whose fame faded as she got older, while Blanche became known later as a refined actress. Now old and alone, Jane still holds bitter feelings of resentment against Blanche, and slowly starts to torture her crippled sister.

For the Whatever Happened to Baby Jane? trailer.

For more information about Bette Davis, take a look at these books:

For more information about Joan Crawford, take a look at this book: