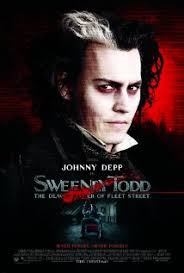 And now for something a little more current. No horror film series would be complete without a musical, right? Well, okay, maybe not. But I’m happily adding this one to the mix for its creativity, and numerous nominations and awards.

Benjamin Barker (aka Sweeney Todd aka Johnny Depp) is a London barber that teams up with another tenant, Mrs. Lovett (played by lovely Helena Bonham Carter), to murder his own barber shop patrons, so that Mrs. Lovett may make meat pies. If that doesn’t qualify as disturbing and worth of the classification of horror film, I’m not sure what does.

If musicals don’t quite do it for you, you should watch it because  Johnny Depp and Helena Bonham Carter make movie magic together or because you just can’t help but love Tim Burton’s films.  Johnny Depp, Helena Bonham Carter, and Tim Burton are also known to work in other films together like Dark Shadows (2012), Alice in Wonderland (2010), Corpse Bride (2005), and Charlie and the Chocolate Factory (2005). If you’re a fan of any of these films, you’ll probably love Sweeney Todd just the same.