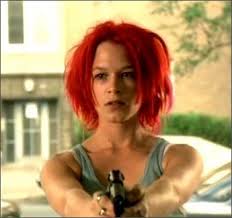 Today I’m bringing you a German film called Run Lola Run (1998) or Lola Rennt in German. The premise of the film is a bit hard to explain, but it’s a game of what-ifs and do-overs. The main character of the film, as you may have guessed, is Lola. We watch her try to help her boyfriend escape a terrible fate. I would highly recommend this intense, action-packed film. Also, if you’re a fan of fast-paced techno, you’re in for a treat.

You may recognize this actress from The Bourne Identity as Bourne’s love interest Marie. This film also won many German film awards and was nominated for many other European and American film awards as well.

Since Run Lola Run, the director, Tom Tykwer, has directed many more films you may know. Some more of his recent films are Perfume: The Story of a Murderer (2006) and most recently Cloud Atlas (2012). You might still be able to find Cloud Atlas in some second run theaters. I’m including a trailer below for you to preview.