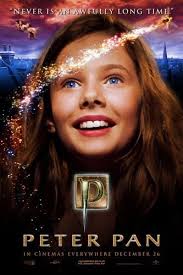 For today’s post, I’d like to highlight the film adaptation of the eternally popular Peter Pan (2003). Although there are already many film adaptations of Peter Pan, I’m going to focus on the 2003 version directed by P.J. Hogan. Many of you are probably familiar with the story, so I’ll stare you boring details. But for those of you who aren’t, lets just say that if you’re into pirates, fairies, and adventures, then this is the film for you.

Before the film adaptations, there was the play, which was also entitled Peter Pan. Many people might not know that before the play, the character of Peter Pan was in The Little White Bird (1902).

If you’re looking for more information on Peter Pan, take a look at the following:

As always, I’m including a preview for your viewing pleasure.