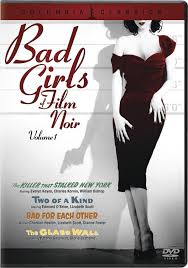 In the library, we recently added old Hollywood films. Two in particular are Bad Girls Film Noir and Forbidden Hollywood Collection. All the films were produced in the 1930s and 1950s. In other words, these films were made after the advent of sound, but before color. The films in Forbidden Hollywood Collection were produced before the Motion Picture Production Code or Hays Code, which was the earliest form of censorship and continued until the film rating system which is, of course, still used today. For a sneak peak, view the clip below.

In case you’re interested in “newer” avant garde films (or prefer films in color), I would suggest another recently added DVD Treasures, which contain 26 films produced between 1947-1986.