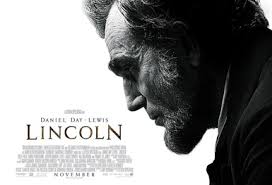 Today I’m featuring the 2012 film Lincoln, which is partially based off the book Team of Rivals: The Political Genius of Abraham Lincoln. The newest Lincoln film stars Daniel Day-Lewis as the brave Lincoln and Sally Field as Mary Todd Lincoln. Day-Lewis won an Oscar for Best Performance by an Actor in a Leading Role for his role. The film also won an Oscar for Best Achievement in Production Design.

The screenplay writer Tony Kushner was nominated for an Oscar, but sadly didn’t win. Kushner has also written many other very well-known screenplays like Angels in America. We have both the book and DVD in the library.

As always, I’m leaving you with some videos. The 20 minute Lincoln Featurette can also be found in the DVD. I highly recommend it! Steven Spielberg gives great insight into how he wanted the film to look. The second is a preview of the film.