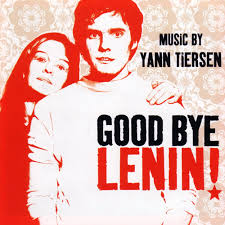 Our story starts right before the fall of the Berlin Wall in 1990. Alex, played by Daniel Brühl, lives with his very dedicated and proud socialist mother and sister in East Berlin. After seeing Alex protest against the German Democratic Republic, Alex’s mother suffers a heart attack and falls into a coma for eight months. During her time asleep, she misses the reunification. When she awakes, Alex and her doctors find it best to continue living in a make-believe German Democratic Republic to prevent her weak heart from breaking (see the symbolism?). This story is part comedy part drama. If you ever wondered what socialist life looked like, this film gives some great insight.

This is probably the film that made Daniel Brühl into a German film star. Since Good Bye Lenin!, Daniel Brühl has appeared in some American films such as Inglourious Basterds and The Bourne Ultimatum. The film itself was nominated plenty and won some European awards for best film, best director and best actor. As always, I’m including a preview of the film below for your review.

Daniel Brühl is staring in a new film directed by Ron Howard called Rush. It will be out during the 63rd Berlin Film Festival and already has positive reviews. If you’d like a little look at Rush, take a look at the behind the scenes look.