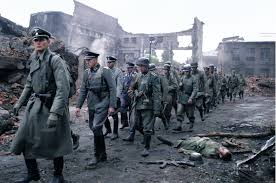 Today’s featured film is Downfall (2004). The film covers the final 10 days before the end of the World War II. We witness Hitler’s final days and his breakdown at having lost the war, and what became of Hitler’s inner circle. Like so many war films, this one is pretty bloody, so be prepared. Bruno Ganz, who plays Hitler, gives a great performance and one that you’ll likely not soon forget.

The film is based off the book Inside Hitler’s Bunker: The Last Days of the Third Reich (originally published as Der Untergang: Hitler und das Ende des Dritten Reiches in 2002), which we have here in the library. For more books on Hitler, check out these books.

Downfall was nominated for an Oscar for Best Foreign Language Film of the Year in 2005, and was also nominated and won many European film awards.

As always, I’m including the trailer below.

For a Nazi parody, I would recommend Iron Sky, which came out in spring 2012. Unfortunately, we don’t have it here in the library, but I know it’s available on Netflix. I’m including a trailer of the film below as well mostly because it’s funny.