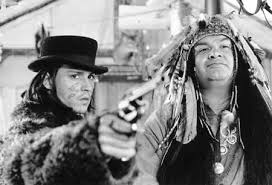 Looking for a good western? Dead Man tells a story of William Blake’s journey (played by Johnny Depp) out west and the dangerous people he encounters. Other people you might recognize in the film are Gary Farmer, Crispin Glover, Iggy Pop, and Robert Mitchum. The film is directed by Jim Jarmusch who directed other films like Year of the Horse (1997), Ghost Dog: The Way of the Samurai (1999), and more recently Broken Flowers (2005). Another interesting fact is that Neil Young provided the guitar score.

Although this film came out in 1995, it is completely in black and white. So if black and white isn’t your style, you may want to rethink watching it. But really, a film starring Johnny Depp is too good to pass up. As always, a trailer is included below.