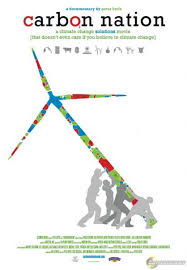 Carbon Nation (2010) is a documentary about solutions to combating climate change. Some of the topics covered are green economy, solar energy, carbon based fuel, and cheap, efficient energy. Unlike many other documentaries that point fingers, this documentary takes a more optimistic approach to climate change.

The director, Peter Byck, said he first became aware of climate change in 2006 and like any concerned citizen of the world, wanted to know if there was anything he could do about it. Interesting enough, climate change isn’t actually the focus of the film. He says, “A person didn’t have to believe in climate science to still want clean air and clean water.” So Byck went around interviewing all types of people from CEOs to economists and they all agreed that, “using as little energy as possible and making clean energy are important goals; whether for solutions to climate change, national or energy security or public health.” And thus, Carbon Nation was born. If you would like to learn more about how to reduce your carbon footprint, I would take a look at this film.

For more information on Carbon Nation, I highly recommend taking a look at their information packed website.

As always, I’m including a trailer to the film below.