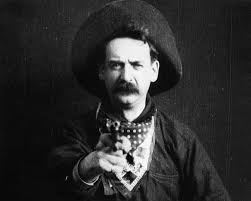 Please note that this film isn’t about the network Nickelodeon, but rather about about nickelodeons, which were early motion picture theaters. Nickelodeons got its name simply for the fact that they typically cost a nickel for admission. Can you believe that?!

Before the Nickelodeon: The Early Cinema of Edwin S. Porter centers around the years from 1894 to 1908, which is just slightly before silent films became a huge industry. Included in the DVD are a documentary, 16 Porter short films and 3 additional Porter shorts. Porter’s film The Great Train Robbery (1903) is “credited with establishing realistic narrative, as opposed to Méliès-style fantasy, as commercial cinema’s dominant form. The film’s popularity encouraged investors and led to the establishment of the first permanent film theaters, or nickelodeons, across the country” (Encyclopedia Britannica). Typical films during this time averaged only about 15 minutes.

The video below is Porter’s The Great Train Robbery (1903). It’s in black and white, but Porter also uses a technique called tinting, so there are bits of color in the film. Tinting involves manually coloring each frame, which, as you can imagine, is incredibly time consuming.

As always, here is a short trailer to the film to entice you.

Flash 10.2 or above Required

To view films, please download Flash.
If you have an iPad or iPhone
Download Fandor from the App Store.