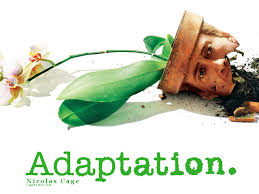 Today in Filmblogland, I bring a semi-autobiographical story about Charlie Kaufman’s (played by Nicholas Cage) struggle to transform the non-fictional book The Orchid Thief into a screenplay (hence the film title). Now, I know what you’re thinking, “what do you mean by semi-autobiographical?”

The screenplay writer for Adaptation (also available on Bluray) Charlie Kaufman, writes himself and his fictional twin brother Donald into the story. And although there is no Donald Kaufman (in real life), Charlie gives his fictional brother credit for co-writing the screenplay Adaptation. Well, the joke’s on Charlie when he and Donald are both nominated for an Oscar for Best Adapted Screenplay in 2003.

If you’re a fan of Being John Malkovich, Confessions of a Dangerous Mind, Eternal Sunshine of the Spotless Mind, and Synecdoche, New York, Charlie Kaufman is responsible for those screenplays as well.

For a preview of Adaptation, look at the trailer below.