Did you know that before there was Hollywood, Chicago was the place for movie making? Chicago has a long history as an important place in the film industry. Movie making began in Chicago in 1896, with two of the world’s first film studios headquartered in Chicago. William Selig’s Polyscope studio, at Irving Park Road and Western Avenue, was the world’s largest. Chicago’s innovative filmmakers developed some of the earliest movie cameras and projectors. The weekly serial was also born here.

Some of the original buildings remain. At Claremont and Byron you can spot this building’s doorway that still bears the Selig symbol. 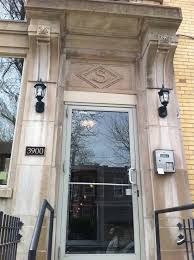 A few miles away at St. Augustine College, you can find this former entrance to Essanay Film Manufacturing, the most important of Chicago’s silent film studios.

The major studios eventually left Chicago for sunnier climates, but today the area still enjoys a vibrant business as setting and location for many movie productions. It is not uncommon to be able to see scenes from your everyday life on the big screen. You can also borrow many of these movies from the MVCC Library for your smaller screen viewing. This list from our collection includes movies that are important to Chicagoland because they were either filmed in the Chicago area or are stories/histories about Chicago. Here are some highlights from our collection.

If you want to find out more about Chicago’s film industry there are a few really great resources you might want to consult. From the Chicago Historical Society, The Encyclopedia of Chicago covers the history of movie production and movie going in Chicago and highlights the importance Chicago has played over time. The Chicago Film Office oversees filming in Chicago. Their site includes links to casting call information, film festivals, a listing by year of movies that were filmed in the city, and a listing of what is filming right now around the city. For an extensive listing of movie (and television) people, including actors, writers, and directors from Chicagoland you can visit the IMDb website. Lastly, for a guide to 100 years of movies and locations (and quite a few anecdotes), as well the history of the industry in Chicago, check out the book Hollywood on Lake Michigan from our collection.