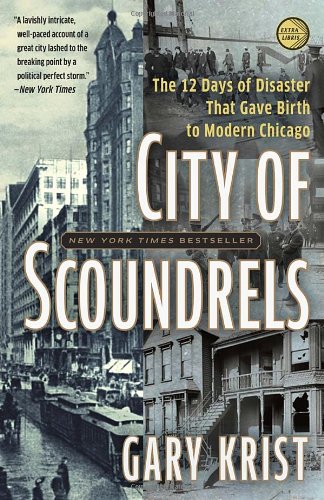 On this day 94 years ago, a Goodyear blimp caught fire over Chicago’s crowded Loop and crashed into the skylight of the Illinois Trust and Savings Bank.

It was America’s first major dirigible disaster and the beginning of a harrowing 12-day period in Chicago history that is the subject of Gary Krist’s book City of Scoundrels: The 12 Days of Disaster that Gave Birth to Modern Chicago (2012).

In the days following the crash, Chicago experienced a violent race riot, a crippling transit strike, and a sensational child murder case.

As you can imagine, the events made headlines, which you can find in the Chicago Tribune Historical. Here is the Trib’s  front page story on the day after the blimp went down: “BLIMP BURNS; KILLS 11: AIRSHIP AFIRE CRASHES THROUGH LOOP BANK ROOF Thousands See Gas Bag Burst and Crew Leap in Parachutes; Gas Tanks Explode in Illinois Trust”.